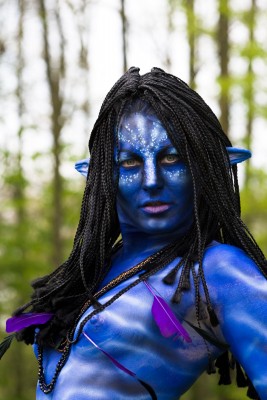 Na'vi fandom is global and fueled by imagination

We recently embarked on a project to record Na’vi phrases into Mightyverse. Na’vi is a constructed language created by James Cameron and Dr. Paul Frommer for the movie Avatar. Due to the popularity of the movie, it’s estimated that Na’vi is already the fourth most popular constructed language, after Esperanto, Klingon and Elvish (from the Lord of the Rings).

I’ve been fascinated by the community that’s sprung up around Na’vi and the people who are learning it. It has the potential to become a relatively popular language, with events where people communicate solely in Na’vi, teaching it to their children and translating texts like Shakespeare and the Bible. In the face of the decimation of indigenous languages worldwide, friends of mine who are following Mightyverse have questioned why we would spend anytime documenting Na’vi while so many worthy, incredibly vital languages need to be recorded.

That’s a fair and thoughtful question.

My own feelings about the movie are complicated. I thought it was ultimately a violent revenge fantasy cloaked in a peaceful message film. Kind of Dances with Wolves all over again, with a weird Pocahontas story woven in. I’m not a big fan of the film and felt kind of yucky after seeing it. But I like weird stuff and I’m clearly not the intended audience for the film anyway. I have to confess though that I was absolutely entranced by the craft of the film and the exquisite production that it represents. Cameron has no equal in the universal spectacle of Hollywood film. And his work has now spread across the globe to places more refined stories will never reach. It’s a true phenomena of human storytelling writ large.

So, here are the reasons why I felt Na’vi recordings could be important for the evolution of Mightyverse.

– Na’vi is international. I love the fact that people all over the world are learning Na’vi and in the process sharing a love of language across cultural borders.
– Na’vi learners are obsessed. It’s amazing how many incredible resources have been produced so quickly, and how they are evolving daily. They’ve escaped beyond the confines of the film and are now creating their own world far more interesting than the limits of Pandora.
– Na’vi excites children about language and other cultures. Children are the key to the future of language survival. If they learn about adpositions, topical, dative and genitive cases through Na’vi, well that can’t be too harmful.

Finally, if people learn about Mightyverse through a link somewhere to Na’vi phrases, well, that would be very nice as well.