I love learning languages. I love that spark of understanding when I get my point across in a new language. I love how my brain settles into unfamiliar patterns as I discover how to say something in a language different from my own. I even love the silly mistakes early on, when I’m brave enough to speak and someone else is not afraid to correct me. I’ve puzzled at the contradiction of how I can love learning a language, yet it still requires great discipline.

With Mightyverse, we wanted to capture that simple joy of mastery and make it easier to get to those good feelings more often. We set out to design a mobile, social experience that would make it so we actually want to practice vocabulary, since it feels like playing a game, rather than feeling like homework. 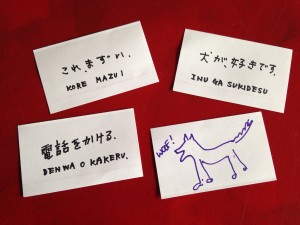 Our first paper prototype was in Japanese.

After some gamification research, we designed our mobile software game, then before building it or creating a detailed visual design, we set out to create a “paper prototype.” This is a common software design practice where we actually construct the experience with drawings on paper and get people to look at and interact with a series of sketches, making it easy to get quick feedback on layout, wording, and a sequence of interactions. For our game, which relies heavily on the crowdsourced video phrases in Mightyverse, we realized we could substitute a native or fluent speaker of the language to create a real-world experience that mimics an online experience of interacting with our global language community.

We decided that we would not write a line of code until we could create a situation with our game where a group of people in real life had fun learning and speaking their learning language. We didn’t just want to add sparkles and unicorns to make it entertaining, we wanted to tap into the aspects of social learning that we believe will make the mobile game intrinsically fun.

Through several design iterations, we actually created two separate card games. The second one was much easier to play test since it required only one speaker of the learning language. We created the card game in three languages (Spanish, English and Japanese) with hand-written phrases and printouts pasted on index cards. We then went to the fabulous SFBabel Meetup, and asked random groups of strangers to play our game. It was exciting to see people having fun playing the game and we learned so much from their responses.

For our next iteration, with my friend Val, some kids and friends, we printed out our “helper” cards with instructions that were way too long and a little confusing…

But once we started playing, it was fun. It was amazing to see the transition from bored skepticism to laughter and playful banter in Spanish! We played for hours, with longer and longer stretches where everyone only spoke Spanish.

After many more sessions of playing the game, iterating on the rules and the cards, we have a system that really works. People have fun speaking Spanish, whether they start with little confidence and very few words or many years of Spanish classes.

We’ve designed a crowdfunding campaign as a way to reach language learners who can pre-purchase and play the card game. The next step will be to combine the approaches and make the game playable when there is no fluent speaker present using a mobile app, integrating our crowdsourced video phrases. If you’d like to review the deck, write us! We look forward to hearing from you.